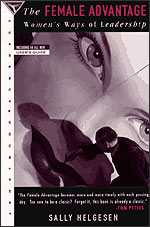 People often ask what inspired me to write The Female Advantage, first published in 1990, still selling strong, and described as “the classic book” on women’s management by no less than Tom Peters!

Why I wrote “The Female Advantage”

I wrote the book simply because I felt that women were getting bad advice: they were being told to leave their values at home and conform to whatever they found in the workplace-to adapt, to fit in, not to try to change things. Throughout the 1980’s, this was the message of such influential best-sellers as The Managerial Woman and Games Your Mother Never Taught You, and in college and university courses around the country. Somehow, people assumed that one half the human race could enter the workforce-and begin to claim positions of authority and influence-without having any long-term effect upon the workplace at all.

I didn’t buy it. I had worked as a speechwriter for large organizations, and I knew firsthand how these companies were struggling to adapt to the changes that were beginning-just beginning-to reshape the world of business at the time. And I knew that women, as outsiders to the mainstream business environment, often had a fresh perspective about what needed to change. Finally, I intuited that women had talents, ideas, attitudes and ways of working and leading people that were in many cases just what organizations needed in order to adjust to the demands of the changing economy. I didn’t want to see a historic opportunity squandered because women were getting a lot of negative advice, and I decided to do something about it.

How I wrote the book

I began by interviewing about 80 very successful women-entrepreneurs as well as women who had succeeded in the corporate world. Drawing upon what I had learned, I then did “diary studies” of four of America’s most successful women leaders, chosing those women who were most skilled at articulating why they managed and led as they did. I followed the women throughout their days, becoming their shadow; I noted everything: how they managed their time, kept their schedules, dealt with subordinates, ran meetings, answered their mail; in one case, I even got to witness how one of the women leaders let someone who worked for her go. I discovered in the process of studying the women that management is like a good novel: what really matters, what is memorable and revealing of character, is all in the details.

These diary studies form the heart of The Female Advantage: Women’s Ways of Leadership, the first book to focus upon what women have to contribute to the workplace rather than what they lack or how they need to change. I’m very proud of being able to say that. Since publication, the book has been reprinted many times, translated into eight languages, and become a standard text in colleges and universities. I have given hundreds of keynotes and workshops as a result, speaking to women in corporations, business and professional network, to women educators-even the women of the CIA!

Women’s ways of leadership are relevant as never before

When I wrote the book, I had intended it to influence organizations, so that they could begin to better value women. But working women have been the chief audience. For nearly three decades, they have told me that “this book validates how I do things, and has shown me me that I indeed have a leadership style.” But men also got the message. Over the years I’ve heard from David Gergen, who uses it in his leadership course at the Kennedy School of Government at Harvard, and General Perry Smith, who uses it in his course at the National College of War. They recognize that the times have caught up with women-that as organizations seek to become less hierarchical and draw more broadly from their base of talent, women’s ways of leadership are relevant as never before.

The Female Advantage becomes more and more timely with each passing day. Too new to be a classic? Forget it, this book is already a classic!

The first book to address women's leadership on the ground, away from abstractions, through close observation of how leaders actually behave. The female leaders Helgesen puts under her thoughtful microscope are fascinating and diverse. She helps us understand not only 'the female advantage' but leadership in general.

This book is a winner. Rich research and great inspiration.

Inspirational, important, transformative. This book has changed the way I think.

Must reading for women who are leaders or who want to be.