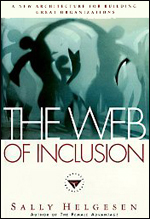 In The Web of Inclusion, I take a look at organizations that are great at drawing strategic-level ideas from people in the ranks by operating in a web-like and inclusive manner. While the book isn’t focused explicitly on leadership, I’m happy to say that the Wall Street Journal hailed it as one of the best books about leadership ever written!

The term “web of inclusion” originally came from The Female Advantage. The women-led organizations I studied in that book were not standard hierarchies led from the top down. They were more circular in structure and were led from the center. I needed a way to describe them, so I called them webs of inclusion. The media picked up on the name, so I decided that for my next book, I would see how webs of inclusion could operate in organizations in a way that was not tied to gender.

The Web of Inclusion offers five case studies. Each shows how the organization in question used a web to solve a specific and pressing business problem. The companies I studied include Intel, the semiconductor maker and Silicon Valley giant; Beth Israel Hospital in Boston; The Miami Herald; Nickelodeon, the children’s television network; and Anixter, a telecom infrastructure supplier outside Chicago. The challenges these organizations used webs to address included redefining the market, dealing with diversity, empowering the front lines, making learning part of the work of every day, and building strategic alliances.

I learned a lot from doing the studies. At Intel, for example, I discovered the importance of honoring non-positional power, power that does not derive from or reflect an individual’s formal position, but is instead based upon relationships and connections, expertise, or personal authority and charisma. Intel is great at acknowledging and harnessing non-positional power, rather than viewing it with suspicion, as happens at so many organizations. Webs form more easily in companies that do not over-emphasize the power of position.

The Miami Herald used a web to make the paper a fairer place. The web evolved from a more traditional task force by redistributing power in the organization and by changing how it worked, so that it began operating by means of inclusion. The web shook up the Herald by publishing raw data from its employee surveys; by including the squeaky wheels at the paper in decision-making; and by loosely defining its task as addressing any area of perceived unfairness, even if that meant jettisoning such formerly sacrosanct practices as reserved parking spaces for senior executives. I was doing my case study at the Herald at the same time that political leaders in Washington had convened a healthcare taskforce, and I was fascinated by the contrast between the groups. The D.C. taskforce never became a web, and it operated by means of exclusion, with famously disastrous results!

I believe great companies will operate as webs of inclusion in the future because they are superbly adapted for meeting the challenges of a global networked era. Webs allow organizations to draw on the widest possible base of talent, a huge advantage in an economy based on knowledge. Flexible webs enable resources to flow to where they’re needed. Open webs balance out the tendency to become hierarchical. Multi-pointed webs put organizations more directly in touch with those they serve, and make partnerships easier to achieve. Perhaps most importantly, webs break down the old industrial-era division between the heads of organizations and the hands-those who come up with ideas and those who execute them. In doing so, they return joy, creativity and a firm sense of participation to the work done at every level.

The Web of Inclusion

Essential to understanding how organizations will change in the years ahead.

Sally Helgesen has given us an important book at a critical time. Leaders wrestling with obsolete hierarchies will find clarity, vision, and guidance as they face the need for flexible, fluid management structures and systems. The Web of Inclusion gives us direction for today and delivers tomorrow's imperative for leaders.

Sally Helgesen makes a compelling case for a core rethinking of how we structure our organizations. The managerial webs she describes make for durable organizations in which information flows effectively, enabling maximum collaboration and flexibility. To the extent we perfect this art, our organizations will thrive in the coming decades.