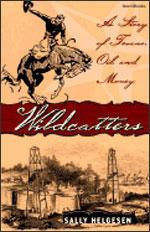 Wildcatters was my first book, originally published in 1982, and I am very happy that Beard Books has brought it back into print. The book tells the story of the last years of the Texas oil boom of the late seventies and early eighties– an era familiar to the entire world because of the wildly entertaining television series, Dallas. It was a wide-open time when independent oil producers were still staking claims and drilling for oil all over the southern United States, following the timeless frontier maxim, “Get while the getting’s good and move on.” Having spent sixteen months traveling around Texas in that period, my old Smith Corona portable stuffed in the trunk of my white Corvair, I can tell you that the plot lines of Dallas were not far fetched, nor were the colorful characters an exaggeration.

That era is totally over. Exploration has moved overseas, and huge corporations control it. Wildcatters focuses on the transition, embodied in the desire of Dick Moncrief, a third generation oilman determined to stake his claim in the Middle East despite the disapproval of his grandfather, the oil biz icon W.A. “Monty” Moncrief– one of the most charismatic individuals I have ever met, and an old bull whose even mild disapproval few could withstand. Dick finally made his deal, closing with the Israelis to drill in Sinai– and found oil a few days before the land was returned to Egypt. He proved his grandfather’s skepticism right, yet he pointed the way forward, to the internationalization of the oil business. Dick now spends a lot of his time in places like Baku.

People often ask me how I came to write Wildcatters. It’s so different from my other books–most notably because it’s about a business dominated entirely by men. The answer is that I backed into my subject, but then fell in love with it. I was originally sent down to Texas by Harper’s Magazine, with the object of covering the Cullen Davis trial in Amarillo. Davis, who came from a Fort Worth oil family, was accused of murdering his wife’s boyfriend and her daughter during a night of slaughter at their Fort Worth mansion.

In some ways the trial was fascinating, and I enjoyed hanging out in Amarillo, but ultimately I found the proceedings sleazy. Besides, the fine Texas writer Gary Cartwright was at the trial writing what would become an excellent book about the case, Blood Will Tell. I felt Cartwright had the story covered. However, I got caught up in the fun of interviewing people in the oil business and decided they would make a better story. Besides, I was sick of New York– had sort of burned myself out during the disco era– and was ready for a change. Texas seemed perfect.

Spending sixteen months in the state in the company of oil entrepreneurs, mud salesmen, lease rustlers, unimaginably rich socialites, artists, wild-man writers, and disreputable hangers-on, changed the way I look at the world. It made me far more tolerant and open to people whose values are different from mine, and caused me to question some of the pieties that I, growing up in a liberal academic family, had always held dear. In an often provincial world, I became more cosmopolitan. And I fell in love with the big sky and endless sense of possibility that is forms the irreducible essence of the great frontier that still shapes how Americans view themselves and the larger world.

What makes Texas different is not so much its money as its blood, and its awareness of that blood. It’s not the blood spilled in Saturday night brawls or shed in the bizarre murders whose trials make headlines around the country, but rather the blood of human bloodlines. In Texas. there is always an awareness—a cattlebreeder’s awareness, it might be, or a stockman’s—of exactly whose blood runs through a man or woman’s veins, an awareness also of what that blood demands. People in Texas are raised to be what others in their families have been, or at least they are in those two most Texan of family businesses, oil and cattle. Family is destiny here, as surely as it is within the cosce of the Mafia. Success is measured by what one achieves beyond what those who went before achieved.

In America, in the 1970s, it was not universally assumed that a young man would feel a responsibility to do whatever his grandfather or father had done, or feel the need to surpass them in their chosen field in order to prove himself worthy of their blood. The story of right succession and inheritance is the oldest story in the world, but it is no longer always a familiar one in a world in which families break up, sons and daughters follow their own path, and the wealth of the land that binds people together is no longer so easily come by or kept. And yet it is a story that may still be told in Texas, where the old truths are held to be self-evident. Here, the young bulls still lock horns with the old bulls and fight to inherit the earth. And that’s what makes Texas in its deepest heart different.